THIS PAGE WAS EDITED ON 10/9/13. BOOKS THAT WERE NO LONGER FREE HAVE BEEN REMOVED.

5.0 out of 5 stars Cannibalism, the cave and the Game September 26, 2013
By Colleen M. Johnson Gasi
Format:Kindle Edition|Amazon Verified Purchase
REVIEW: Hundreds of people live in this small area that even they know not where they are. In order to get out, you have to win five Games. The Games can be labeled with a K and an R for Kill or Rape. A lot of the people were kidnapped and brought to this place where they were given a tattoo of numbers. These numbers are shown on the Game board and there can be several Games in one day or days can go by where no Games happen. I felt relief when it rained but it’s super hard to stay clean in mind and body in this hell on earth place located somewhere in the world. You have the community pot where people line up for their daily ration of food. It just happens that the pot contains human ‘meat’. If you lose a Game or break a mostly hidden rule, you end up in the pot. This is a community of people who have born children here where there is no land to grow crops and the only thing given to them is garbage and only if they were good ‘pets’ and fulfilled the requests from the Game board. This garbage is a treasure and treat that helps keep them alive. There are other things that could happen in the Game, terrible, dark things. If you like horror, this is a good book. There are some editing issues but because I was so curious about the characters, some are truly shady, I kept reading. I just kept my screen clear of my kids for it’s not for young people. The cannibalism is not for fun, but to live. It’s something you have to deal with on a personal level. I would recommend this book to any horror fan that doesn’t mind killing, rapes, mutilations and cannibalism in their reading materials. I’d say 18+ in age for readers. Thanks for a chilling story that kept me glued to my kindle!

It’s so hard to see my children make friends and lose friends.  Children can be so touchy and there is this label, the world is all about labels right now, called ‘bronies’.  Boys who like My Little Pony toys.  Now I don’t care if a boy wants to play with an alligator stuffy, a toy kitchen, puppet show, cars, trains, dolls, ponies, whatever!  Boys can play with what they want and the same goes for girls. But this ‘bronies’ thing is crazy.  Both my son’s hate it such as HATE HATE HATE it.  They’ve been teased by someone for watching a ‘MAD’ tv show episode featuring a caricature imitation of the popular cute Pony toys.  Mention that word ‘bronies’ and they go nuts in a bad negative way. I wish I could understand it but so far, a year in, I still have no clue why they hate it so much. THEY get teased for NOT being a ‘brony’.  There is this kid in Canada that my son played on his PS3 with all the time but this kid called my son some very bad words and unfriended him, one of the worse things you can do to someone on LBP2.  So, ‘BlXXThundXX 200X’ – X in place of real digits so I can’t be sued for slander or other garbage- grow up! Watch that mouth of yours and if you’re a brony, who cares? Not everyone has to like everything you do. 😦 When I hear ‘mortal enemies’ it breaks my heart at the age of ten! Jeez, kids should be having fun not obtaining a mortal enemy at such a tender age.  Another 😦 for making my son so upset last night and another :p for treating him like, okay got to use a nice word when I REALLY want to use something else, dirt. Go play with your pony toys and leave boys who don’t care for them alone. We do not have to conform to what YOU like. 😦 Just cause I’m a mom who cares. Personal space bubbles and hugs – Colleen

PLEASE CLICK ON LINK BELOW PICTURE TO GET TO AMAZON.

In The Moment (Moments) [Kindle Edition]
Olivia Jake (Author)
5.0 out of 5 stars See all reviews (11 customer reviews)
Digital List Price: $0.99 What’s this?
Kindle Price: $0.00
You Save: $0.99 (100%)
Length: 284 pages (estimated)
Book Description
Publication Date: September 14, 2013
For 39-year-old Sam Davis, career, independence and control have always defined her. Relationships have never been a priority, much less even on her radar. Not only has there never been enough time, but she’s just never found the right man: someone strong enough not to be threatened by her success as well as a man whose own strength could allow her to give up some of her innate control. Between owning a successful Los Angeles entertainment ad agency and being the alpha-dog to her two pit bulls at home, Sam’s used to calling the shots. Always. But when she pitches for, and wins The Network account, its charismatic French founder, Laurent Román makes Sam question everything she’s ever known.

At Laurent’s insistence, he and Sam meet daily for the better part of a month. He has a network to launch and the stakes, pacing and intensity couldn’t be higher. Working this closely with the flirty Frenchman, they can’t help but get to know each other better, each day, her resolve waning and the lines blurring making it harder and harder for Sam to fight her attraction and his overtures. But it isn’t until they travel together that their relationship finally crosses the line. Sam had already witnessed Laurent’s domineering tendencies, but now she realizes how truly dominating he is. He pushes her beyond her comfort zone, making her simultaneously question and crave the things he does to her. Much as Sam knows she shouldn’t be sleeping with him, he makes her feel things she’s never before felt. But as their passion grows, so too do Sam’s fears that she’s risking her reputation and perhaps her entire career.
#49 Free in Kindle Store (See Top 100 Free in Kindle Store)
#15 in Kindle Store > Kindle eBooks > Literature & Fiction > Genre Fiction > Romance > Contemporary 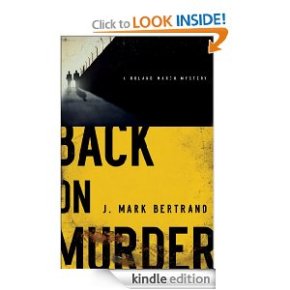 Back on Murder (A Roland March Mystery Book #1) [Kindle Edition]
J. Mark Bertrand (Author)
4.3 out of 5 stars See all reviews (584 customer reviews)
Digital List Price: $6.99 What’s this?
Print List Price: $14.99
Kindle Price: $0.00
You Save: $14.99 (100%)
Length: 384 pages
Book Description
Publication Date: July 1, 2010
Det. Roland March is a homicide cop on his way out. But when he’s the only one at a crime scene to find evidence of a missing female victim, he’s given one last chance to prove himself. Before he can crack the case, he’s transferred to a new one that has grabbed the spotlight–the disappearance of a famous Houston evangelist’s teen daughter.

Sergeant First Class Carl Waters left the army behind before the bomb went off in L.A. He lived off the grid, avoiding the fallout from the bombs and the Burnout Fever that ravaged the world. With the occasional trespasser to keep his skills sharp, life was smooth and settled and exactly how he wanted it.

All that changed when three stragglers showed up that he didn’t have the heart to turn away. Two children led by a shepherd who had lost her own way, Carl felt the sins of his past had finally come calling. Especially when it turned out the children had their own demons in pursuit.

Reading posts from friends on Facebook. Scary things happening in this world. Wish I could put safety bubbles around people to keep them safe but then we’d need bigger everything. chairs, cars, bus seats, imagine! Unless you could shrink the bubble to be like, a second skin but still keep you safe and alive.  Who’s the genius in the world today who will patent this idea? Someone has had to think of it way before little ‘ol me.  Laundry, one child playing his PS3, laughing, arguing, shrieking, yes he shrieks, and so much noise coming from that room. Happy day for him.  Shrieks, laughter, groans and yelling from my older son’s room as he loses a game and gets mad, then gets a new game that will connect with one of mine and we can play thanks to his Grandma, now he’s happy too.  That liquid in the hummingbird feeder gets very hot sitting in the sun, they still drink it but talk about a burned tongue and yes Hummingbirds have tongues.  I got so close yesterday I could see one swallow.  Of course the one with the red at its throat zoomed at my face and for a moment I feared it pecking me then I just stared in open curiosity before it went to the feeder.  I was cutting the roses, the yellow ones, right next to the feeder.  So beautiful.

I couldn’t stop the tears as I looked through songs on youtube trying to find appropriate ones for a friend in need.  I wish everyone could send up a positive prayer for my friend Terry and her brother who REALLY needs it. Help ease his suffering and open God’s arms for him. Help Terry have the extra strength she needs to get through this. Amen.

I’m not posting any free books today from Amazon. Instead I will post a link and you can view 100 free books in the Literature & Fiction genre. Start at one and work your way around. http://www.amazon.com/Best-Sellers-Kindle-Store-Literature-Fiction/zgbs/digital-text/157028011.

I am currently reading several books and will be posting reviews on them soon. Such awesome writers, I feel so blessed.

Hugs and personal space bubbles to everyone!  Colleen

p.s. Help an author with a review is SUPER important to me. Go to that page  here https://nightshadelane.com/help-an-author-with-a-review/ and check out books still needing a review. I check them each day to check their prices always looking for free but many free change to priced over time. Get them while you can!